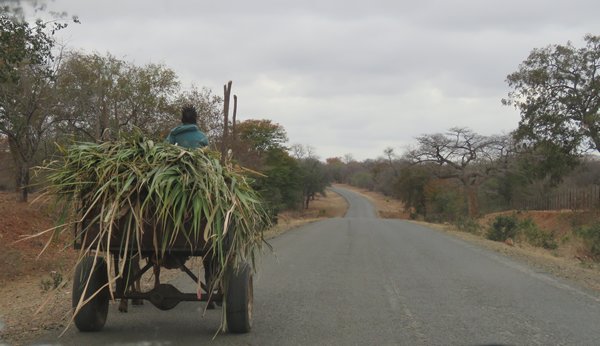 On the dusty highway kids sit on the roadside alongside the potholes. It’s sugar cane cutting time in the lowveld and the enormous trucks are hugely overloaded with blackened sugar cane sticks being taken from the fields to the processing plants. As you get closer to the town it’s not just kids sitting by the potholes but also teenagers and young men with ox and donkey carts.  As the overloaded cane trucks go through each pothole some of the sugar cane gets dislodged and falls to the tarmac where it is hotly pursued by the youngsters. Free sugar cane, hungry stomachs or both I asked myself and the answer came a few bumpy potholes later as kids darted dangerously out in front of traffic to grab a stick or two of blackened sugar cane. Three young boys, out of school now for half a year, thin and barefoot, grabbed the fallen sugar cane and threw it up onto a cart being pulled by four donkeys. Jumping up onto the cart they gestured to their open mouths, asking for food but I had nothing so just waved and called out “how are you?” Shouts of laughter rang out and they echoed my question, waving back, their smiles wider than their bellies and warmer than their bare feet.  A teenager with a spiky hairstyle driving a cane filled cart pulled by a pair of oxen raised his hand in response to my greeting but his eyes told a thousand stories of boredom, missing school and learning and living a life of grinding toil.

Children using potholes to get food and driving donkey and ox carts feels like a forgotten era, a lost generation, a world away from the ongoing trauma in Zimbabwe where nothing is normal or predictable in these frightening times.

Five weeks after he was arrested, award winning, corruption exposing journalist Hopewell Chin’ono, is still incarcerated; three times denied bail, his internationally acclaimed human rights lawyer, Beatrice Mtetwa, now banned from visiting or representing her client. Others who had called for people to join a protest against corruption in July, a protest that never happened, also remain incarcerated with bail repeatedly denied.

Meanwhile the economic crisis continues unabated in Zimbabwe. The government rate for US dollars is this week pegged at 83 Zimbabwe dollars for one US dollar, leaving everyone without access to US dollars in a state of penury. Pensioners who had been living off pensions of US$500 a month which were converted to Zimbabwe dollars by the government nineteen months ago are now getting the equivalent of six US dollars a month (six loaves of bread). The inflation rate is now being officially quoted at 837% and a report by Bloomberg a few days ago said: “should government fail to bring inflation under control, bread will cost at least Z$600 by this time next year.” The WFP say that 60% of Zimbabweans, 8.6 million people, will be “food insecure” in four months time, by December this year.

A statement from the Zimbabwe Catholic Bishops Conference (ZCBC) ten days ago described the dire situation prevailing in the country in a Pastoral Letter: “Some of our people continue to live in hideouts, with some incarcerated while others are on the run. Fear runs down the spine of many of our people today. Our government automatically labels anyone thinking differently as an enemy of the country.”

The Minister of Information, Monica Mutsvangwa responded by saying the ZCBC Pastoral Letter had been written under the “evil minded” leadership of Archbishop Robert Ndlovu who she said was “fanning the psychosis of tribal victimization.” Minister Mutsvangwa said Archbishop Ndlovu: “is inching to lead the Zimbabwe Catholic congregations into the darkest dungeons of the Rwanda type genocide.”  Chilling words for Zimbabweans to hear forty years after the massacre of 20,000 people in Matabelelend for which no one has yet been held to account. Chilling words that we hope little boys on a donkey cart loaded with sugar cane never have to hear or understand.

Until next time, thanks for reading this Letter From Zimbabwe, now in its 20th year, and my books about life in Zimbabwe, a country in waiting, love cathy 28 August 2020. Copyright © Cathy Buckle.  https://cathybuckle.co.zw/

For information on my books about  Zimbabwe go to www.lulu.com/spotlight/CathyBuckle2018 . For archives of Letters From Zimbabwe, to see pictures that accompany these articles and to subscribe/unsubscribe or to contact me please visit my website https://cathybuckle.co.zw/