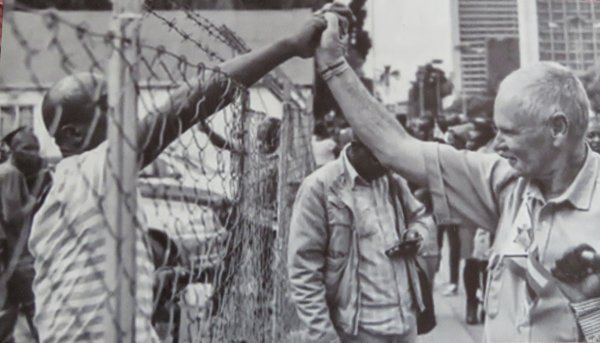 I am writing my Letter From Zimbabwe today in memory of my friend who passed away this week. His story is our story and versions of it can be told over and over again across our country where we are a nation unable to move forward as we are suffocated by secrets, paralyzed by non accountability, silenced by fear.

My friend’s farm was invaded by war veterans and government supporters. He and a friend were seized from a police station where they had sought help to rescue their neighbour, a fellow farmer who had been abducted by war veterans. They were beaten repeatedly before being left tied up in a vehicle in the bush. The neighbour they had gone to rescue was attacked by a mob and then murdered in broad daylight, witnessed by scores of people. To this day, two decades later, the perpetrators have never been held to account.

My friend lost his savings when Zimbabwe’s currency collapsed in 2005-2008 under Robert Mugabe’s rule when we reeled in years of hyperinflation in the billions of percentage points. When Zimbabwe’s shop’s were empty and there was no food to buy my friend and I crossed borders and bought groceries to last six months at a time. When we couldn’t afford to buy food in other countries we ate soya mince, made our own bread, jam, butter and yoghurt. When we couldn’t afford food our friends and neighbours helped us and when they couldn’t afford food we helped them. This is the Zimbabwean way.

My friend lost his savings again in 2018 when Mr Mnangagwa came to power and his Finance Minister changed all our US dollars to Zimbabwe dollars at a rate of one to one and just three years later you need one hundred and fifty  Zimbabwe dollars to buy one single US dollar. To this day the entire nation remains crippled and struggling to survive, savings lost, pensions worthless, salaries pathetic.

In late 2017 my friend marched with me in Harare when the country finally called for an end to Robert Mugabe. We were not naive that day and knew there were  multiple agendas at play on that day. Along with his daughter and grandsons we marched for hours that day across Harare, flags wrapped around our shoulders, smiling, laughing, hugging, invigorated by rivers of people, swept along in the tide of togetherness. Hundreds of selfies with strangers were clicked that day, a day where we all belonged, we all had hope.

Journalists were everywhere that day and one took the picture of my friend that accompanies this letter (see my website). A picture of a fence, arms stretched up on either side of the wire, two men, strangers to each other, clasping hands in hope. This is what Zimbabwe can be.