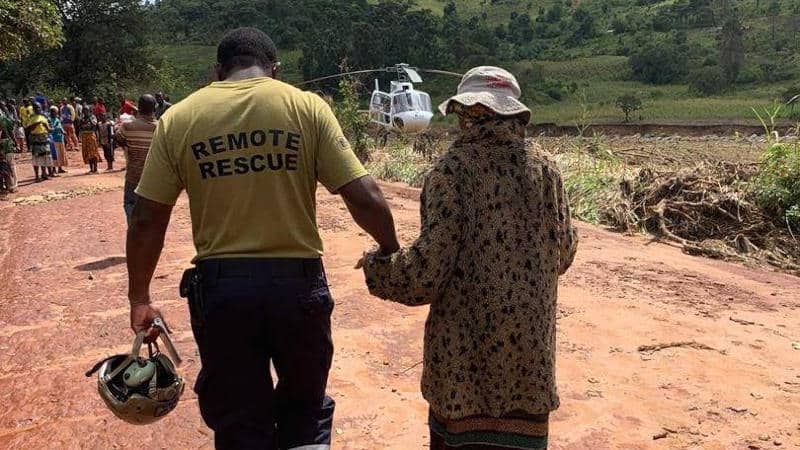 The latest Unicef report on the impact of Cyclone Idai in Zimbabwe says that the estimated number of people affected in nine districts has increased to 270,000 of which 129,600 are children. 139 schools were damaged affecting 90,000 children. Unicef say 171 deaths had been reported at the end of March with another 330 people still missing; tragically these are statistics that will increase as clean up operations continue and mud and flood debris is cleared away. Unicef say the worst impact of the cyclone was in Chimanimani and Chipinge but other areas affected by high winds and flash flooding were Buhera, Nyanga, Makoni, Mutare rural, Bikita, Masvingo and Gutu.

As the days have passed since Cyclone Idai hit Zimbabwe there have been stories of incredible bravery and heroism side by side with heartbreaking tragedy and loss. Rescuers in the immediate aftermath described unimaginable scenes, utter devastation and everywhere a massive jumble of rocks and huge boulders that slipped down from the mountains engulfing everything and everyone. Familiar places had just gone, swept away in raging floodwater and rivers of thick red mud. In one short video clip, freelance journalist, Privilege Musvanhiri stands in an area newly covered with thick sand and giant boulders. This, he says, was the Rusitu Valley Township where there was a police camp, government offices, businesses and homes all of which are now completely gone, buried under his feet, under the giant boulders. He described people wandering around looking for anything that would give them closure because there were no answers as to where all the people had gone: were they alive, dead, washed away?

We heard countless stories of people helping each other and saving people stranded, stuck, terrified; moments away from being taken by torrential water or clinging mud. We heard how a man tied a rope around his waist and went into a raging river to rescue two women stranded in a tree. He tied the rope around them and they were dragged to the bank, shortly afterwards witnessing that same tree being pulled away in the flood waters. We heard of a 25 year old young man rescuing his mother, then his son and then his brother from a massive mud slide. We heard harrowing tales of bodies being dug out of the mud, of children whose parents were washed away in the flood waters and of parents who lost their children. We heard and continue to hear of the amazing, tireless determination of individuals, clubs and groups to get relief to people, repair the damage and restore hope. The ongoing work of camp Econet, Miracle Missions and so many other private groups, individuals and companies is inspiring as are the donations that continue to pour in from all directions and international organizations.

We cannot help but wonder how much extra revenue Zimbabwe’s government made in 2% tax levies from unbudgeted purchases of relief for Cyclone victims in the past three weeks.  Do they not see or care how much this tax, which grows every time we move the same ten dollars, is hurting each and every ordinary, struggling Zimbabwean?

I end this letter with these critical words from a group of UN experts speaking in Geneva yesterday about the current appalling economic situation in Zimbabwe: “We are gravely concerned that, as the situation in Zimbabwe deteriorates, the Government is pushing people further into poverty. We are not aware of any Government measures to provide even minimal safety nets for those who are already living on an economic cliff-edge and who will suffer the most from these regressive policies.” Until next time, thanks for reading this letter and my books about life in Zimbabwe and for helping us in the aftermath of Cyclone Idai.