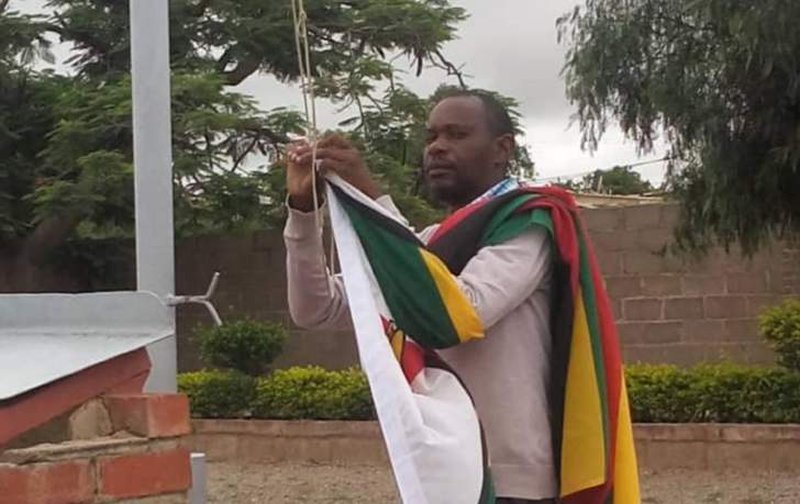 It never rains but it pours in Zimbabwe. Having melted through weeks of unbearable heat with temperatures over 38 degrees Celsius, the rain finally moved into Zimbabwe with high winds, deep purple clouds and pounding rain. In some places storms of 150 mm (6 inches) of rain were recorded in a couple of hours. One such place was Hwange where our biggest thermal power plant is; 135 mm of rain in a couple of hours flooded the town and the power station. Our lights that usually only come on in the middle of the night didn’t come on at all for a couple of days until things dried out and then we went back to our normal abnormal state of 18 hour a day power cuts. Meanwhile flying ants swarmed out of the baked ground in their millions and mushrooms appeared from nowhere growing at a speed almost as fast as our government finds ways of making money for themselves.

This week our government got off the hook with regard to their obligation to pay doctors the same salary they were earning a year ago. Zimbabwean Strive Masiyiwa and his Higher Life Foundation, has established a fund that will pay junior doctors US$300 a month for the next six months. Tawanda Zvakada, spokesman for the Zimbabwe Hospital Doctors Association said: “This is not a long-lasting solution but this is an opportunity for our members to go back to work and finish their training.”

While this deal was being finalized our Supreme Court ruled this week that all debts incurred before the 22nd Feb 2019 will be settled in the local currency on a US$1 to Z$1 basis. The ruling was made by Chief Justice Luke Malaba, the same Judge who ruled that Mr Mnangagwa won Zimbabwe’s 2018 disputed, contested election. In the week that Justice Malaba made the currency/debt ruling, the bank rate for US$1 was Z$17 and the black market rate was US$1 for ZS25.

To put Justice Malaba’s ruling into context: if someone owed you US$100 in Feb 2019, they can now pay you back $100 Zimbabwe Bond dollars  which today is only worth the equivalent of US$4, not quite enough to buy three mangoes in the supermarket. The Supreme Court ruling was made in response to an appeal over a US$3.8 million debt owed by Zambezi Gas to N. Barber which is now to be paid in Zimbabwe dollars and worth only US$145,000.

Undoubtedly this ruling will mostly benefit the well connected and the political elite, because who else can access such huge debt in a bankrupt country? Borrow a million, pay back fifty thousand. What a bargain for Zimbabwe’s big borrowers; they must be rubbing their hands in glee. Legal commentator Alex Magaisa calls this the ‘great heist.’ The rest of us just shake our heads at the disgrace. What a tragedy for Zimbabwe’s lenders who have overnight lost 95% of their money. They have been reduced to paupers like the rest of us since the Zanu PF government changed US dollars to Zimbabwe Bond dollars eleven months ago.

Meanwhile while our government is off the hook with doctors and off the hook with debts, so far they’re doing nothing realistic about the teachers who are earning the equivalent of US$40 a month and can’t afford to do their jobs. When a school teacher and 153 students in Bulawayo held a demonstration this week to highlight the absence of teachers and the huge school fee increases, police  launched a manhunt for the teacher who had by then gone into hiding. Bulawayo biology teacher Brian Mutsiba subsequently released a letter which reads in part: “The presence of officials from the President’s Office, Military Intelligence and Prisons intelligence on that fateful day is testimony enough to say there are threats on my life.” If there was any doubt about the need for the demonstration by Mr Mutsiba and 153 students from Njube High school, the  Zimbabwe Schools Examination Council announcement this week says it all:  there was only a 31.6% pass rate in November’s  O’ Level exams. There’s a shameful irony about a manhunt for a biology teacher when teachers can’t afford to go to work and children can’t afford to go to school.

We are left asking who will bail out Zimbabwe’s teachers and who will then bail out Zimbabwe’s police where a constable earns just US$43 a month and then the soldiers, nurses and never ending list of people after that. Isn’t this what governments are supposed to do with the taxes we pay them?

Until next time, thanks for reading this letter from Zimbabwe, now in its 20th year, and my books about life in Zimbabwe, love cathy 24 January 2020.  Copyright © Cathy Buckle.  https://cathybuckle.co.zw/

For information on my books about Zimbabwe go to www.lulu.com/spotlight/CathyBuckle2018 For archives of Letters From Zimbabwe, to subscribe/unsubscribe or to contact me please visit my website https://cathybuckle.co.zw/