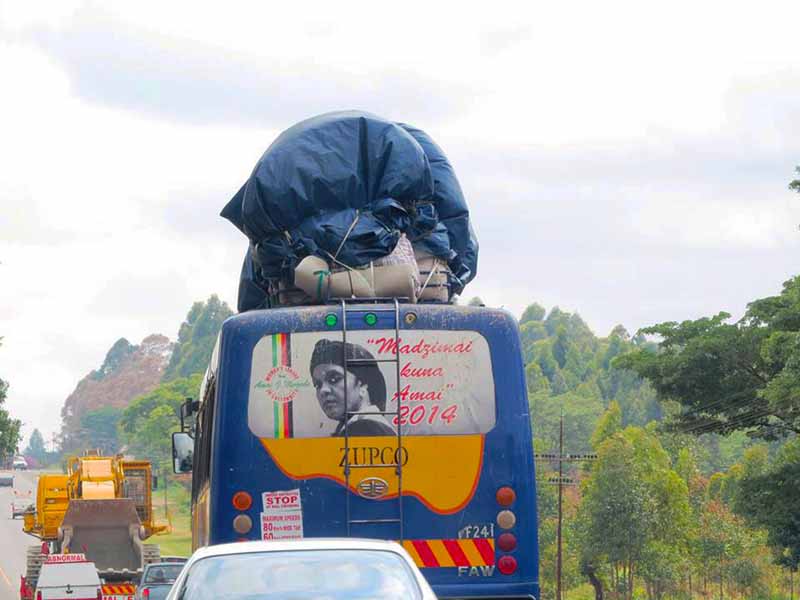 These March mornings the mist hangs low and thick at dawn. The tall roadside grass, heavily laden with dew and seeds, bows deeply, its gold and green interspersed with pink and white Cosmos flowers. Out of the early morning mist a Francolin emerges, runs a few steps, pecks at grains in the sand, stops, looks and then disappears back into the long grass. A minute or two later the Francolin’s raucous call rings out half a dozen times, an alarm from the within the wet, white dawn.

March is always  the time of year when I think of our stolen farm. It’s eighteen years ago this month that farm invaders arrived at the gate, throwing bricks and rocks, whistling and shouting HONDO, HONDO, HONDO, making up their own laws, changing my future and that of my country. WAR! the invaders were shouting that day and for the last eighteen years a slow, creeping economic, social and moral war has unraveled our lives and our country. Everyone knows the statistics that followed: 80% food imports; 90% unemployment; a quarter of the population in exile in the Diaspora; thousands dead from cholera, hunger, malnutrition; thousands killed in political violence; a collapsed currency; inflation in the billion percent range and the list of horrors goes on and on.

Zimbabwe is “Open For Business,” is the new official line being peddled in Zimbabwe. It’s almost four months since Mr Mugabe was removed from office in a bloodless coup. He was only one of hundreds who had a hand in the collapse of Zimbabwe; hundreds who were in positions of leadership, authority and government, who oversaw dastardly events, said nothing, did nothing; instead they participated, praised and ululated in delight at every  action and hateful speech aimed at anyone who dared to think differently from them.  Mr Mugabe did not do this alone to Zimbabwe.

Mr Mugabe broke his silence this week saying his ouster from power was improper, illegal and unconstitutional. “We must undo this disgrace we have imposed upon ourselves; we don’t deserve it, we want to be a constitutional country,” he said.

Undoing Zimbabwe’s disgrace is indeed uppermost in all our minds; we’ve had many, many years to think about it.

Responding to Mr Mugabe’s sentiments on Twitter, President Mnangagwa said Mr Mugabe “is entitled to express himself freely, as is the case for any private citizen.” Words of major significance in a country where free expression has been a dangerous thing to do for many years.

While Mr Mugabe was talking about what Zimbabweans deserve, one of his erstwhile loyal servants, Ambassador Simon Khaya Moyo, longtime Zimbabwean government official and   now the Minister of Information, was busy outlining the fate of “settlers.” People who were “illegally” and “erroneously” settled in “rural areas” and “prohibited areas” are being given notices to vacate the land as soon as they have harvested their crops, he said. People who have settled themselves in “unplanned areas” are also to be removed, Khaya Moyo said.  Presumably this also includes wildlife, forestry and wetland areas which have been devastated in recent years, overseen by exactly the same men and women who were, and still are, in Zimbabwe’s government.

It remains to be seen if Zimbabwe will emerge from the mist like a Francolin at dawn or if Open for Business is just words with which to win an election. Until next time, thanks for reading and for your support of my books.