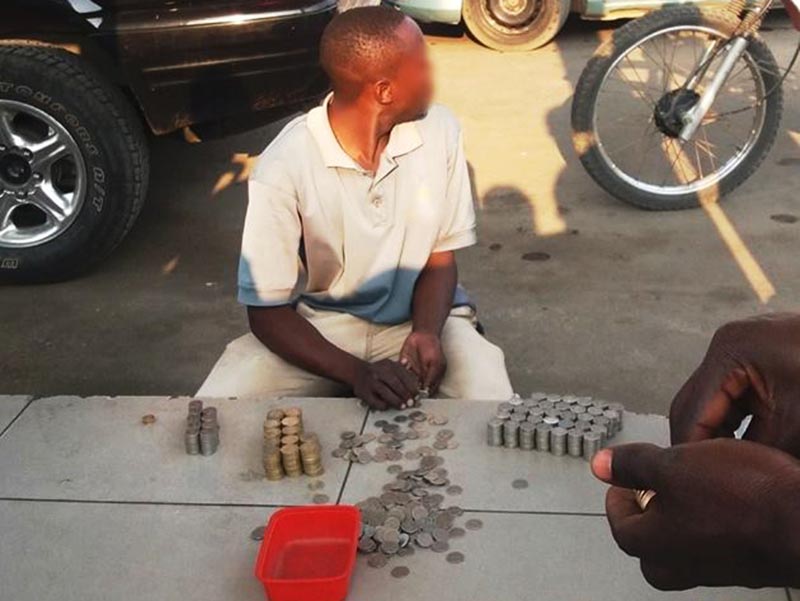 A picture speaks a thousand words and my letter this week is of the pictures that best define the look of Zimbabwe in the early summer of 2018. The skies are bright and blue; the Jacaranda trees are beginning to display their purple flowers and the Mulberry trees are dripping fruit everywhere. In our neighbourhoods the summer birds have returned: orioles, paradise flycatchers, mousebirds, louries, starlings, weavers and hoopoes. It’s a beautiful place to be, but… .

Under the trees outside the local provincial hospital the women who sit selling avocados, bananas, tomatoes and apples have all gone: banished by police because of the cholera outbreak. As I approached their stalls where I often buy bananas, an elderly woman trudged along pushing a wheelbarrow covered with bright cloth concealing her produce. Five policemen and women were lolling on the vendors home-made bamboo tables, chatting and looking at their smart-phones and the elderly woman was chased away: no selling allowed here. It does not bear thinking about Zimbabwe’s 90% of unemployed people who survive by vending on the pavements and roadsides; they have not been able to sell their wares for the past ten days; how will they survive? How will they feed their families? How will they pay their bills this month? No provision for their welfare, even in the short term, has been offered by our leaders.

From one fuel station to another I went, trying to get fuel but always the attendants simply lift their arms, palms uppermost, saying without words: no fuel here. Finally after three days of trying, a message came to say one station had received a delivery. It felt very much like 2008, rushing out at a moment’s notice to sit in the burning sun in a long, slow- moving queue, waiting, hoping, praying that the fuel wouldn’t run out before I got to the pump. Sitting on the pump stand two attendants were counting the big piles of coins people had paid to purchase fuel. Paying for fuel with coins, what an ironic situation while our President was in America telling the world that Zimbabwe is Open For Business! “Where are we going?” I said to the pump attendant as he counted coins. Smiling he pointed to the coins and said “we are going to hell, ” and we both laughed.

Visiting a friend she showed me the receipts for the life sustaining medicines she has to take every day. Last month they cost US$37, this month they were US$61. There were no words; nor are there words for the price of groceries which are galloping upward everywhere as the black market rate for US dollars has rocketed since the contested election, making resupply of goods almost impossible. This week we hear that one hundred US dollars costs two hundred Bond Dollars. The two currencies are supposed to be equal value but you can only buy imported goods with real US dollars, not green, two dollar Bond notes!

But not to worry, because despite the permanent queues outside banks and the complete non availability of US dollar bank notes, Reserve Bank Governor, John Mangudya reassured Bloomberg TV a few days ago that foreign investors would be able to make money in Zimbabwe and then get their money back out. “We need more companies coming to the country and others will come in and others will go out and that’s why we are saying Zimbabwe is Open For Business.” Oh dear!

Until next time, thanks for reading this letter and my books about life in Zimbabwe, love Cathy.