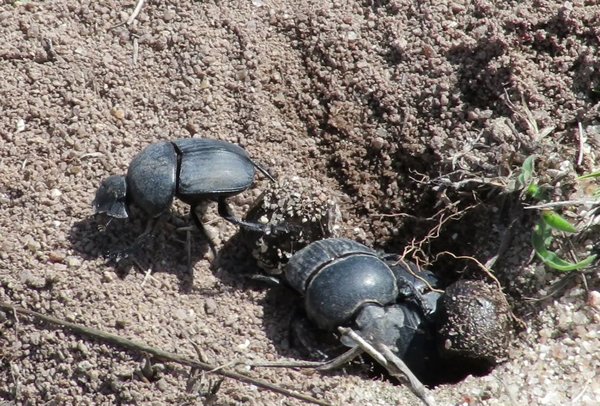 The rains have returned to Zimbabwe, breaking an unbearably hot couple of weeks which had left us melting the moment we stepped outside. Green is everywhere and with it has come the weird and wonderful, the absurd and the insulting and the downright shameful.

First the weird and wonderful: the noise of the rain on the roof at night; searing flashes of lightning streaking down the purple sky; teeth marks in the soft green flesh of avocados that have fallen during the rain; a grey bone-filled owl pellet under a big msasa tree; freshly churned mole hills marching in a line across sodden ground; figs so big that they almost fill your palm, being gorged on by barbets and louries, bulbuls and white eyes. And out there in the bush dung beetles in a frantic frenzy, digging holes in the soft damp ground, running to grab balls of dung, rolling them backwards to their holes and burying their precious food or using it to make underground breeding chambers.

Then comes the absurd as politicking and electioneering moves up a gear as election 2023 gets nearer. In the past fortnight the Chairman of Zimpapers (Zimbabwe Newspapers Group) said: “we want to do the best we can to support the government, to support the system”… Editors “should not be ashamed of supporting the ruling party, ”as  this was a “national agenda.”  Next came the words of Vice President Chiwenga who was speaking in Beitbridge and said:  “Zanu PF will rule forever and if they dare (the naysayers), we will amend the law that we want President Emmerson Mnangagwa forever.”

Next there was the insulting which came from the ZANU PF Director of Information Tafadzwa Mugwadi who called British MPs ‘pink pigs.’  This came after UK MPs expressed concerns about the declining political situation in Zimbabwe. Lord St John Blesto said the British government would only support Zimbabwe’s bid to rejoin the Commonwealth when Harare restored the rule of law, protected freedom of speech and political freedoms.  Mr Mugwadi responded by saying:  “The UK Embassy and UK Ambassador to Zimbabwe Melanie Robinson must be the most embarrassed by such classical stupidity. Sit down pink pigs.”

Finally there was the downright shameful. After telling civil servants they would get US dollar bonuses, this week they heard it would be to a maximum value of US$700 and would not be paid in US dollars but in Zimbabwe dollars at a conversion rate of 97 to one. So for your US$700 you will get Z$68,000 whereas if you got the US$700 in your hand and changed it on the black market you would get Z$122,500 where the street rate is 175 to one at the moment.  A huge difference of Z$54,500 and a major loss to civil servants who have been kept in near penury for many years; they find themselves the losers again and again and again.

Please visit my website for details of my latest books and news of Black Friday sales prices. There is no charge for this Letter From Zimbabwe but if you would like to donate please visit my website. Until next time, thanks for reading this Letter From Zimbabwe now in its 21st year, and my books about life in Zimbabwe, a country in waiting, love cathy 27 November 2021. Copyright © Cathy Buckle. https://cathybuckle.co.zw/