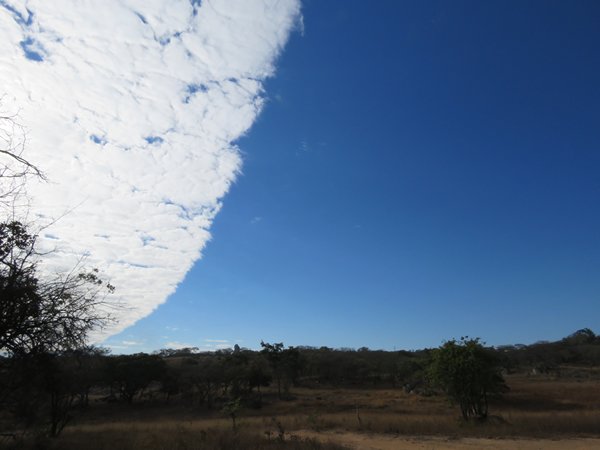 Just when we thought winter was done, a big freeze crept into Zimbabwe, the nights and early mornings dropped to three degrees in my home area and we struggled into the low teens during the day. A beautiful full moon lit up the night sky and thick frost carpeted low lying areas at dawn, the ice crystals sparkling and glistening in the early morning sun. A friend and I went walking to see the spectacle of this late winter blast, jackets, gloves, frozen ears and finger tips. As we walked an approaching warmer weather front was blazed across the sky in a spectacular straight line, pushing the cold and wet clouds away; bright blue sun on one side of the line and white cloud on the other. It’s a gorgeous time of year as we wait for the warmth of summer to get here; the trees are losing their leaves, Mukwa trees are covered in bristly fried egg pods and hard green cricket ball fruits adorn the branches of the wild orange trees (Matamba). As I write another cold front is moving in and with jackets and scarves back on we get out of the wind and catch up on events in Zimbabwe this past fortnight.

Down in the vlei (wetland) near where I live the sound of a trumpet and drumming catches and carries on the cold wind. There is another funeral underway and there is a pain in my heart as day by day we count the terrible cost of Covid. Specialist physician, Dr Tinashe Gede in Harare described the situation in the Covid 19 Red Zone of the well known private St Anne’s hospital this week: “Today has been a very difficult day; literally since morning there had been death upon death.” Dr Gede described the situation as a “crisis” and an “absolute catastrophe.”  “We don’t have surge capacity at hospitals as our facilities have been chronically under-funded for a long time,” Dr Gede said. “Chances of people going into ICU and coming out alive are very slim.”

Mr Biti described corruption as “a huge threat to the existence of our country as a nation state.” He spoke about US$1.5 billion worth of gold being smuggled out of Zimbabwe every year; US$3 billion through cigarette smuggling; US$5 billion through illicit financial flows and “millions and millions of carats of diamonds every year.” Mr Biti said since the coup of Nov 2017 corruption had become entrenched and deep rooted, affecting every sphere of life. He said it was being perpetrated by “roving bandits” in fuel, procurement, transport, mining, the Reserve Bank and finance ministry. “Zimbabwe has essentially become a criminal enterprise, a mafia state and a kakistocracy,” Mr Biti’ said, his words sending me to my dictionary to discover that a kakistocracy is a government by the least suitable or competent citizens of a state.

Mr Biti said: “Zimbabwe’s roving bandits leave nothing for the ordinary person, they leave nothing for Zimbabwe….Zimbabwe is extremely poor yet it’s generating billions and billions of dollars, it’s only them and their children who are eating.” Mr Biti  explained it so well when he said : “The difference between a roving bandit and the stationary bandit is that the stationary bandits will milk six barrels of milk, steal two and leave four for the population. The roving bandits will extract six pitchers of milk, steal those six jugs and also steal the cow so that there is no cow to be milked.”

And so while we wait for summer and for accountability and the day when Zimbabwe’s riches will benefit all the people, we watch helplessly as the looting of a nations assets fill a few pockets while the rest of us struggle to survive. Oh Zimbabwe.