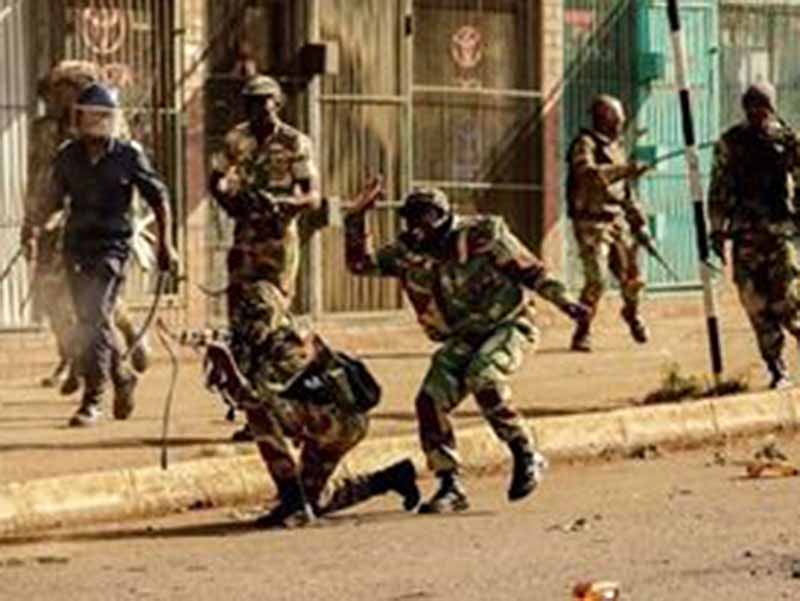 The story of Zimbabwe as seen in my home town, the morning after the declaration of Mr Mnangagwa  as the winner of the Presidential election, can be told in a few, brief sentences.

There was a stunned, eerie silence over the centre of town. There was no sign of jubilation or celebration by the electoral winners. Gone were the big smiles, cheery waves and excitement that had electrified the town until three days ago. The vendors were conspicuous by their absence. Pieces of wood, stones and rubble littered the temporarily empty railway line where hundreds of people normally sell old clothes.

On the main road a young man was pulling a hand cart loaded with a huge mountain of empty plastic containers that he was taking to sell for a couple of dollars.

Everywhere I went people were expressing their sadness. In their words:

We have not woken up to the New Zimbabwe we dreamed of.

We are so hurt.

This is very painful.

Prices will go up even more now.

Nothing’s going to be different, only worse.

The sight of army tanks in Harare, of soldiers shooting unarmed people, of a woman shot in the back two days ago, are fresh on everyone’s minds. Never, in 38 years of Robert Mugabe’s rule, were armed soldiers, with live bullets, unleashed on unarmed protestors.  Everyone wonders if  this is what we are in store for now. Our hearts and condolences go out to the families of the people who were shot down by armed soldiers. Overnight people have reverted to watching what they say, looking over their shoulders and speaking in quiet voices. Such damage done in such a short time.

For today we are wounded, hurt, despairing and dejected. In Harare we see film clips of police driving around with their elbows resting on open windows telling people with loud hailers to go back to work, that Zimbabwe is Open For Business. What work we wonder: selling tomatoes and old clothes on the dusty roadsides?

The MDC Alliance says they do not accept the election results. They have seven days to file an election petition and prove that the ballot was rigged. They won the hearts and inspired the minds of a new generation of young Zimbabweans, now they must prove they were worthy and they must act fast.Hope denied or hope deferred? We can only watch and wait, hope and pray; get back to our abnormal, normal life of bank queues, pavement trading, unemployment, poverty, scratching a living; struggling for every dollar.

Until next time, thanks for reading my letters and books and for supporting Zimbabwe’s long and painful struggle to a new dream, a new Zimbabwe.