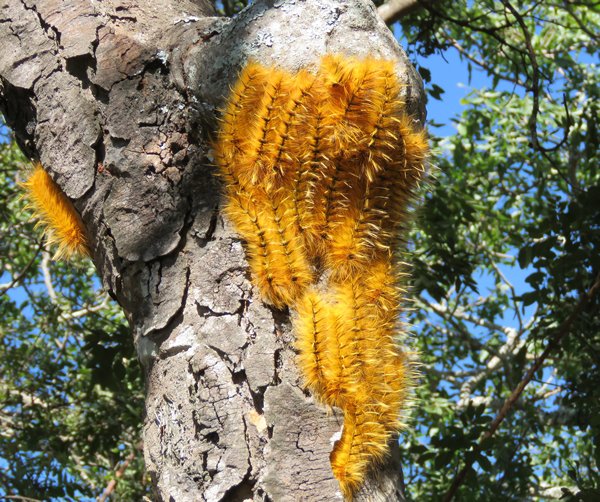 Blue skies and sunshine are filling our days this March in Zimbabwe as our prolific rainy season starts to wane. Up in the trees absurdly hairy orange caterpillars spend their days zipped up close together in fiery orange mats, waiting for darkness when they break up the pack and spread out to feed on leaves of msasa, munondo and mufuti trees. From such stunning caterpillars rather nondescript moths eventually emerge but we forgive them for that in exchange for the weeks of absurdly beautiful orange fluff that adorns our Highveld trees.

This week it’s not just the orange caterpillars that are absurd because politics and corruption always find a way to steal that spotlight. Open mouthed in disbelief this week we heard that Hon Tendai Biti, sitting MP for Harare East, second Vice President of the MDC Alliance, former Minister of Finance, Chairperson of Parliament’s PAC (Public Accounts Committee) and who is busy probing and exposing corruption at the highest levels, had been expelled from Parliament, recalled by a political party he no longer represented. So was this the height of absurdity or was it just inevitable? It’s a typical murky Zimbabwe story to try and explain but follows the same old pattern of a ruling party renowned for infiltrating opposition parties, luring away whoever they can and finding ways to unseat others. This Twitter message from Welshman Ncube about the recall of Mr Biti said it best: “I never thought I would live long enough to witness the ABSURDITY of a political party contesting Parliamentary elections under some coalition and winning ZERO seats but somehow thereby miraculously being said to have SIX MPs and then recalling ALL of them.”

Tendai Biti explained what he thought this was really all about: The “PAC [Public Accounts Committee] of which I happen to be chairperson, this week dragged ZESA [electricity supplier] executive chairperson Sydney Gata to explain how Kuda Tagwirei of Sakunda was awarded the Dema diesel plant without due process.”  “We started with Dema and next was command agriculture and then Zinara,” Biti said, “we are chronicling the corruption reports where Tagwirei is the kingpin. We have those reports ready so my recall is to make sure that issues to do with corruption are not brought before parliament.”

While we wait for the appeals to his recall, it hasn’t been hard to join the dots about to be exposed by Mr Biti and the Parliamentary Public Accounts Committee. Irregular tenders, no tenders, abandoned projects, crooked deals, endemic corruption at the power utility, are all the phrases we’ve been hearing every day about ZESA. Then came this damning sentence about a 200MW diesel power plant in Dema: “The contract was initially won by APR Energy Holdings, a United States-based firm in 2015, but was later inexplicably rescinded and handed over to Sakunda, who in turn subcontracted a losing bidder, Aggreko, as a partner.” (Kukurigo) This is undoubtedly just the tip of the corruption iceberg at ZESA which explains why we’ve endured decades of power cuts and a collapsing electricity infrastructure, not to mention that forty years after independence over 60% of Zimbabwe’s population live in rural areas and still do not have access to electricity, not even a light bulb.

But wait, the absurdity got much worse. Dr Sydney Gata had told the parliamentary Public Accounts Committee that “rebundling of Zesa entities had started following the engagement of a consultant to assess the mechanisms available to restructure the power utility.” You couldn’t make up such absurdity if you tried and so the best way to explain it is from a report in the state controlled Herald newspaper. ZESA “unbundled” the power company in 1997 and 2006 and split it into five companies and now, fifteen long years later, they have “realized that its [unbundled] structure was contributing to the increase in costs as executives were getting huge perks and top of the range vehicles.” (Herald)

Dr Gata said: “Unbundling was never really achieved…. there are seven boards today all owned by the same shareholder and regulated the same way. That has promoted a runaway of control, of assets, of operations and of finances to the industry to levels that have never been imagined and this is the root of the chaos that we witness.” (Herald) The Public Accounts Committee, chaired by MP Biti had  ordered Dr Gata and his board to return on Monday next week prepared to respond to the 2020 Price Waterhouse Coopers’ forensic audit report that unearthed numerous irregularities at the utility.

At that point everything became clear, the light bulb came on, that’s exactly why Mr Biti was suddenly, strangely expelled from Parliament.

Until next time, thanks for reading this Letter From Zimbabwe, now in its 21st year, and my books about life in Zimbabwe, a country in waiting, love cathy 19 March 2021.

For information on my books about  life in Zimbabwe and my Beautiful Zimbabwe 2021 calendar please visit my website https://cathybuckle.co.zw/books/