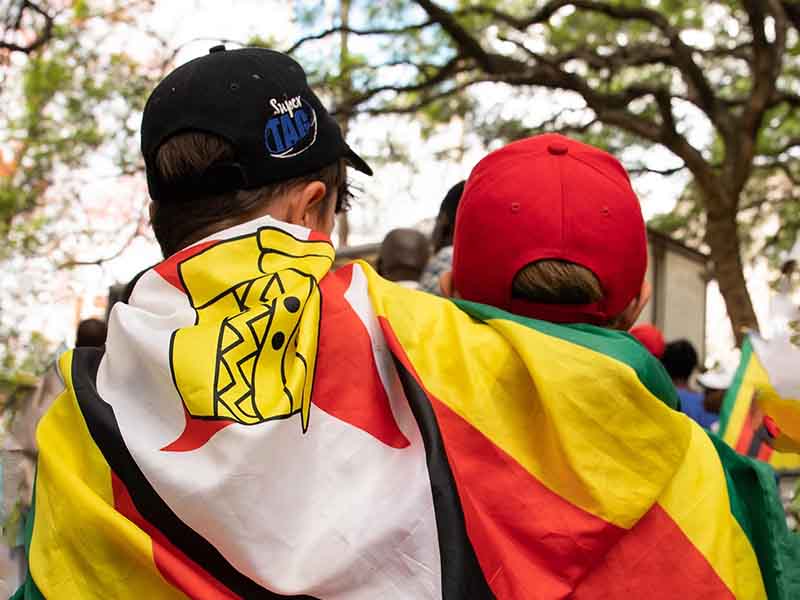 Two years ago today, on the 14th November 2017, I got up early after a stormy, thundery,  night and switched on ZBC TV, Zimbabwe’s only television station. The day before, army tanks had been seen approaching Harare and overnight there were numerous reports of explosions and gunfire from the capital city. At 6 am Zimbabwe’s then Commander of the Defence Forces, General Chiwenga, appeared on the screen reading a statement he had made the previous day. He said that “our peace loving people” were “extremely disturbed” by events in the ruling Zanu PF party and said that “drastic action was needed immediately.”  As soon as General Chiwenga finished speaking, General SB Moyo appeared and read out a long statement saying that this wasn’t a military takeover but that they were  only “targeting criminal elements around President Mugabe that are causing social and economic suffering.”

The coup that they insisted wasn’t a coup on November 14th 2017 led to a week that Zimbabweans will never forget; a week in which we found our voices, our courage, our huge patriotism and overwhelming love for our country and took to the streets in our hundreds of thousands. We weren’t celebrating a coup or a leader or a military cleansing of “criminal elements,” we were celebrating the arrival of hope. Now, exactly two years later, it’s as if it was all just a dream, suffocated in our desperate attempt to survive the diabolical state we find ourselves in again.

“Paint a picture for us of life in Zimbabwe today”, someone asked me recently, so here it is, exactly two years after that precious, brief week gave us a glimpse of hope and of what we could really be.

The rains are near, the sky grey and heavy, thunder rumbling and lightning so close that you smell burning as it explodes metres away from you. In our gardens Paradise Flycatchers with stunning long orange tails build small cup nests on exactly the same branches as last year and on the ground scores of shiny black millipedes with undulating brown marching legs appear from a myriad hiding places. Chongololo’s we called them when we were kids and tried to guess if they were curlers or wrigglers;  it was always impossible to resist the urge to give them a nudge to see if they’d curl up into a tight circle or wriggle hysterically like ticklish toddlers.

In our towns and cities queues are everywhere you look: queues for bread, for fuel, for money, for water.  Jerry cans, wires and noisy, smoky generators are everywhere, keeping what’s left of our dwindling businesses going during 18 hour a day power cuts. Electricity only comes on in the middle of the night for a few hours, production has all but collapsed. The big fast food outlet is open but empty: no customers, no food to sell, no electricity to cook with, generator broken.

Two women using a hand pump are filling up lines of buckets from a borehole opposite the town’s main provincial hospital because the town’s taps are dry again. On a rock nearby other women are doing their laundry in a green plastic bath and draping the clothes over bushes to dry. This is happening on the roadside less than half a dozen blocks away from the centre of the town in an urban area.

A young girl sitting on an upturned tin bucket under a tree does her homework, reading out loud from an ancient, battered copy of Janet and John, her smile beaming when you praise her reading skills.

Desperate shoppers prowling the food aisles in supermarkets looking for anything that they can afford to buy to feed their families. People with tears in their eyes shaking their heads at the huge prices, leaving empty handed. This is the face of a nation whose livelihoods, salaries, life savings and pensions have been rendered worthless in just eight months after all our US dollars were converted to Zimbabwe dollars. As I write you need between sixteen and twenty two Zimbabwe dollars to buy just one US dollar.

And then there are the cold ugly facts that go with these images of Zimbabwe today. In the past week the government has fired 286 doctors who were on strike calling for a living wage; doctors earning the equivalent of only US$80 a month; doctors whose salaries have lost 80% of their value since February.  We are distraught at this irreplaceable loss of our own young doctors and we hear more are to be dismissed in the coming days.

In the same week that 286 doctors were fired cabinet members were told they will all get new vehicles, valued at US$16 million, by the end of November.  Sixteen million US dollars would have been enough to pay a thousand doctors US$1300 a month for a year. Doctors or cars? The government chose cars.

In the same week that 286 doctors were fired news came that Beitbridge District Hospital had suspended mortuary services “as a result of lengthy power cuts and high temperatures rendering mortuary equipment non functional.” In response to this appalling situation the President’s spokesman George Charamba caused a storm on social media after he wrote on Twitter: “Keep your corpse at your house… Don’t burden the state with corpses.”

Meanwhile seven million people have now registered for food aid in twenty three districts around Zimbabwe, one third of them live in urban areas. The World Bank said this week that “extreme poverty” in Zimbabwe has risen from 29% in 2018 to 34% in 2019 (5.7 million people).

I write my letter this week in tribute to our hospital doctors who have worked in appalling conditions for many years without the tools, equipment and supplies they need to care for their patients, unable to do the jobs they were trained to do. Our hearts go out to them and our hope that one day we will be the Zimbabwe we know we can be and they will be our doctors.

Until next time, thanks for reading this letter and my books about life in Zimbabwe.