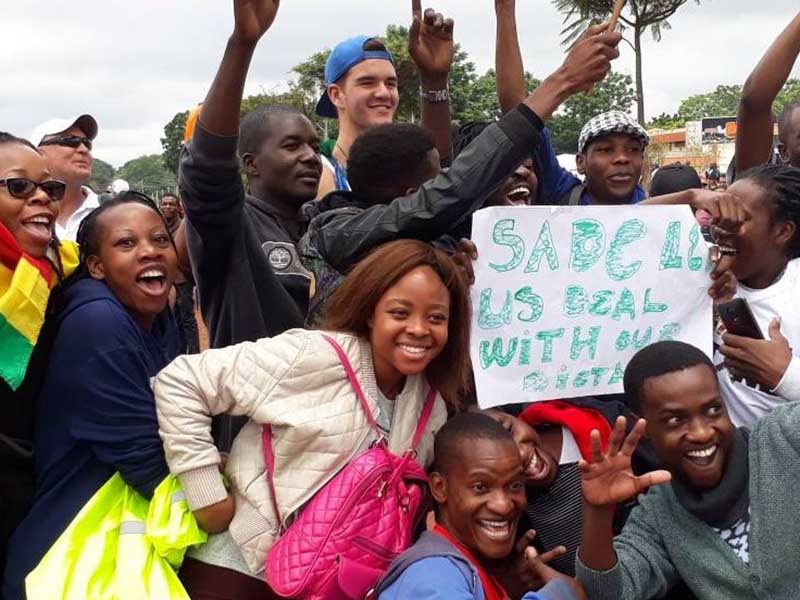 With feelings of profound nostalgia, Zimbabweans are remembering the events of this time last year and trying to hold on, for just a little longer, to the hopes and dreams that we were so sure were within our grasp. For a few exhilarating days in November 2017 we had enormous hope of imminent change and an end to greed, corruption and wide scale looting of the country by a few people at the top.  As I write this letter, one year later, Zimbabwe is in a desperate downward spiral: fuel, food, medicines, new taxes and levies. At such an impossibly difficult time it is easy to give in to despair but I just have to look at the smiling faces on the cover of my new book to know that the fire of hope still burns in our hearts.  News of my new book is at the end of this letter but today it is a time to remember the day Zimbabweans found their voices and came together one year ago. This is my memory of 18 November 2017.

“How do you put into words the day you were part of the revolution? The revolution in which we the people came together and made our voices heard. On the 18th November 2017 I was so proud to be Zimbabwean. My flag was my badge of honour and I wore it with such pride. For seven hours, from one end of Harare to the other, and back again, I marched in the crowds wearing my flag. It didn’t matter what colour we were, what cause or political party we supported or who was marching next to us, we all wanted just one thing: a new Zimbabwe, a free Zimbabwe, a Zimbabwe without the Mugabe’s.

From Fourth Street for fifteen blocks we marched to the Magistrates Court complex on Rotten Row. No one was in charge, no one was leading us, just thousands of people surging down the roads. At every intersection a river of people would join: dance, sing, whistle, shout, embrace, cheer. From the balconies people watched, filmed, waved. From the pavements a million cell phones were filming, clicking, following this day everyone was calling Zimbabwe’s new Independence Day.

Hugging, dancing, hand slapping, fist punching, hundreds and hundreds of selfies and photo bombs. If a soldier or army vehicle went past everyone went mad, screaming, waving, cheering, running after them. When the drones flew overhead, filming us, the crowds erupted; you couldn’t help yourself but join in, waving, screaming, laughing, grinning. So many of the people were under 40 and said they’d only ever known one President in their lives. Whenever a film crew appeared the crowds mobbed them, screaming, waving, eager to tell them: “we’ve had enough, Mugabe must go!”

Along Rotten Row we stood for ages as buses, trucks and vehicles crammed with people headed towards Highfields. Each vehicle was met with waves, screams and smiles. Everything would stop when someone would run into the road and dance ecstatically in front of a truck load of people. Cars hooted and engines revved as loudly as people screamed and cheered. Everywhere, everyone was smiling, laughing, celebrating. No one was leading this section of the revolution; if someone with a flag held up high started to head in one direction people followed. The taste of freedom was on our lips and in our hearts today.

From Rotten Row we walked twenty two blocks towards State House. By now it was well into the afternoon, we’d been walking, celebrating and hugging strangers for hours but the fervor was still there. The excitement was contagious, palpable. Someone starting singing the National Anthem, hundreds of others joined in and I felt tears stinging my eyes. The closer we got to State House the thicker the crowds became until we couldn’t move at all. Drones flew over and we all screamed and cheered and waved. Apparently the army addressed the marchers at the front but it didn’t matter that we hadn’t heard. What mattered was that today we were united, part of the revolution that said quite clearly we’ve had enough.”

What we see now, a year later, does not matter. What matters is that Zimbabweans in huge numbers found their voices in November 2017 and we  will again because the fire still burns within our hearts, I am pleased to advise that my new book, ‘Finding our Voices,’ recounting the events of the last five years of Robert Mugabe’s rule has been released today.  “Finding our Voices,” is the fourth and final book in a series based on my eighteen years of letters from Zimbabwe:  “Can you Hear the Drums 2000-2004,” “Millions Billions Trillions 2005-2009,”  “When Winners are Losers 2009-2013,” and ,”Finding Our Voices 2013-2017.”

Until next time, thank you for reading this letter and my books about life in Zimbabwe, love Cathy