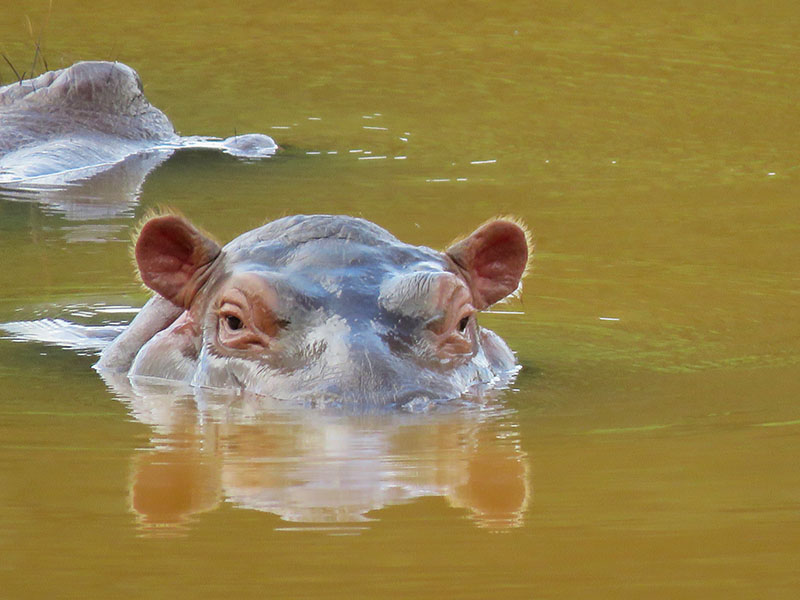 Down on the banks of the muddy Mazowe River I sat practicing my multiplication. Having just about got the hang of my three and half times-tables a week ago, now I had to master the four and half’s if I was to keep up with Zimbabwe’s soaring black market rates. Could four impalas and a youngster count as four and a half, I wondered as I watched the small group of females flick their tails and snort alarm warnings? Nearby two impala males were raising clouds of dust, locking horns, grunting, growling and snorting in the early winter rutting season. I added them to my four and half times-tables calculations but soon completely lost the plot when two hippo’s, and a young one, popped their heads up in the muddy water.

As we were in 2007 and 2008 Zimbabwe is now firmly entrenched back into the realms of the black market and at the mercy of invisible forces pushing the rate higher and higher. A small pile of firewood was US$5 or Bond $20 last week when the black market rate was 4:1; by the weekend the wood was $22.50 as the rate had increased to 4.5:1 and by the time you read this letter it will likely be $25. Change the word firewood to food, clothes, uniforms, institutional fees or medicines and you will comprehend that for the vast majority of Zimbabweans, who have no access to foreign currency, this has become a time of huge trauma.

In the past three months our bank statements which used to say USD, now say ZWL (RTGS). Highway robbery, in front of our very eyes, by our own government has reduced us to a nation of paupers again after they changed US dollars to Bond dollars in February 2019 and got away with it.  Where three months ago your bank balance was US$100, last week it was worth the equivalent of $25 and this week it is worth only $22.22. For teachers who were earning US$600 a month in February the equivalent now is only worth 187.50 and their salary is worth less every month as the Bond to US$ dollar rises. We hear utterly heartbreaking accounts every day of someone’s entire monthly salary now being enough to only buy their monthly medicines with nothing at all left for food, transport, rent or utilities. We have returned to the horror days of Mr Mugabe’s governance where people are back on one meal a day, are cutting their pills in half to make them last longer and children are out of school because parents can’t afford school fees and school uniforms.

The inevitable results of this crisis are gathering pace every day. The shops are full of food but we can’t afford to buy it. Prices of goods and services are adjusted on a weekly and even daily basis. Quotes are only valid for seven days, prices of reservations at hotels, guest houses and resorts change every week. Fuel queues stretch to hundreds of vehicles, clogging roads, blocking intersections, cutting access to shops and leaving us wasting our days sitting waiting in line, doing nothing. Electricity power cuts have resumed and are getting longer every day. We are told to expect power to be cut for ten hours a day peaking between 5 and 10am and 5 and 10pm.  Using generators is the obvious alternative but while we are unable to get fuel to operate them it leaves many businesses unable to function: exactly as it was in 2007 and 2008. Water supply has dropped to once a week in my home town and every morning and evening the suburbs are full of women carrying buckets, going looking for water.

President Mnangagwa’s pre and post election shouts of “PRODUCTION, PRODUCTION, PRODUCTION,” are all but hot air on our cool winter wind, impossible to achieve without a stable currency, fuel, electricity and water. And so I turn my eyes back to the muddy Mazowe river and try to master the times-tables we need at every shop where the question is US$ or Bond; when you ask the rate you have to start multiplying: by four, four and a half or, as I write, getting close to five Bond for one US Dollar.  Oh to be a hippo in the muddy Mazowe River, I think, as the numbers get bigger and bigger and the budget gets smaller and ever tighter.

Until next time, thanks for reading this letter and my books about life in Zimbabwe,.