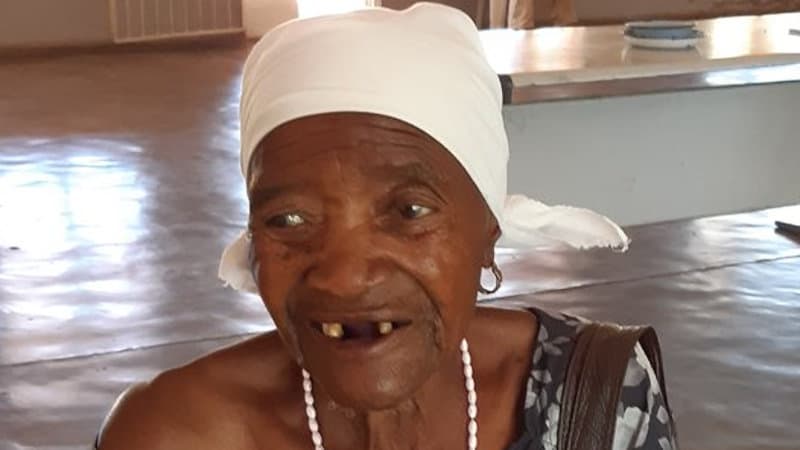 When I met Lydia this week and asked her if I could take her photograph she gripped my hand and nodded, her eyes shining. When I showed her the photograph she stared at it hard, looked at me and whispered her own name: “Lydia;” my eyes, and hers, were bright with tears. I had just seen how and where Lydia lives and was so humbled that she could still smile and love. This letter is for Lydia, in her 70’s, sleeping on the floor and without enough to eat, and for Zimbabwean women who have endured such suffering and pain for so long and yet somehow we still manage to hold our heads up high. I have had many requests to write a letter about women for the International Day of Prayer for Zimbabwe on 6th March 2020; this is our story.

My story began in 2000 when a mob of men arrived at my farm gate throwing bricks and shouting, saying this was now their property, their farm, their home. More and more invaders came, claiming field after field, pushing us to bankruptcy and our livestock to starvation. The invaders cut down trees, erected shacks, taunted and intimidated the farm employees, tortured the shop keeper; threatened to shoot me, harassed and terrified me and my seven year old son. After seven months, when every field was burnt, every fence gone and every employee was deeply traumatized, I gave in and walked away from my home, my life, my income and my future. Every man, woman and child living and working on the farm was also evicted by the mob and also lost everything: we were one in our anguish.

In the two decades that have followed, Zimbabwe has gone through periods of intense oppression and horrific political violence. People daring to demonstrate against human rights abuses have been subjected to extreme brutality at the hands of police and security forces. Twice in the past 18 months the army have taken to our streets, unarmed civilians have been shot in cold blood and women raped and abused. We will never forget the horrific picture of 52 year old Sylvia Maphosa, shot in the back by soldiers as she ran across the road, or of the young woman in white, arms extended seconds before being beaten to the ground by police, or the old woman in a red skirt kneeling on the road appealing to police to stop while one policeman kicked her and others watched.

Zimbabwe has gone from being the ‘Bread Basket of Africa’ to a net importer of food and needs international food aid to survive. Twice in the last decade we have gone into periods of hyper inflation and are in one such period now. When this happens, none are more in the front line of the desperate struggle to survive than us: the women, mums and gogos (grandmothers).

In February 2019 the government of Zimbabwe announced that all of our salaries, savings, pensions and investments, which were in US dollars, had been converted to Zimbabwe dollars at a rate of 2.5 to 1. On that day we all lost 60% of our money, pensions and savings. In the year that has followed the Zimbabwe dollar has continued to collapse and you now need at least 20 Zimbabwe dollars for US$1. In the last year inflation has gone from 4% to over 600%.

All of our salaries, pensions and savings are now worthless. Every US$100 we used to earn or put aside for our pension is now only worth US$5. Wages and pensions have lost 90% of their value in the last year leaving us unable to feed our families, pay school and university fees for our children and even unable to afford our own medication.

For the past six months we have been crippled by 18 hour a day power cuts, only getting electricity in the middle of the night between 10pm and 4am. In the middle of the night we get up to do washing, ironing and cooking. Water only comes from our taps twice a week for a few hours if we are lucky. Every morning women everywhere walk to the nearest well to get water which they carry home in buckets and plastic containers. Every day women and girls go into the bush to collect firewood which they carry home in enormous bundles on their heads; firewood to cook food for their children and heat water to wash with.

A loaf of bread which was ninety cents a year ago is now over twenty dollars and has become a luxury item in our shopping baskets as has cheese, fruit, milk, meat, soap, toothpaste, washing powder and all the things we need to keep our families fed, healthy and safe. Women can no longer even send their children to school with sandwiches in their lunch box. Women who find work in domestic service and spend their days cooking, cleaning and looking after children, now earn the equivalent of just six US dollars a month according to newly stipulated government wage levels.

Unemployment is over 90% leaving families splitting up in order to survive. A quarter of our population are estimated to be living and working in the Diaspora, sending money home for their families to survive. Women are left behind looking after children and grandchildren, selling fruit and vegetables in shacks and stalls on roadsides and pavements.  More than eight million people in Zimbabwe are dependent on international food aid in 2020 in order to survive; this is over half of our population left holding out the begging bowl as a result of cruel and punitive economic policies, massive government corruption and drought. Please pray for us on the International Day of Prayer for Zimbabwe and please tell our story to your families and friends.

Until next time, thanks for reading this Letter From Zimbabwe, now in its 20th year, and my books about life in Zimbabwe, a country in waiting, love cathy  28 February 2020. Copyright © Cathy Buckle.  https://cathybuckle.co.zw/

For information on my books about  Zimbabwe go to www.lulu.com/spotlight/CathyBuckle2018 . For archives of Letters From Zimbabwe, to subscribe/unsubscribe or to contact me please visit my website https://cathybuckle.co.zw/