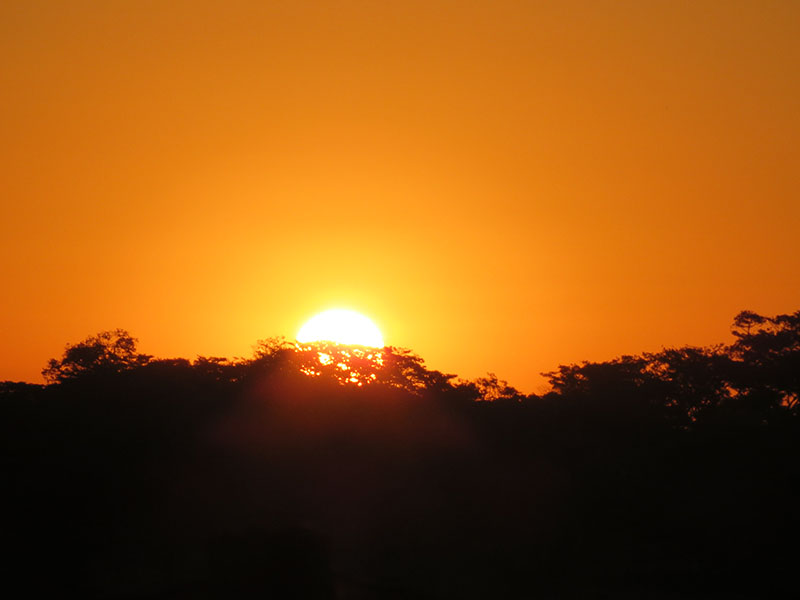 As the sun slips into the horizon these winter evenings, we linger outside to soak in the orange splendor. A bird in silhouette flaps silently across the orange and gold sky and an owl emerges high up in a tree to survey the approaching night. There’s nothing tempting us to go inside in a hurry: no electricity which means no lights to switch on, no computer or TV, no hot bath, no batteries left for mobile phones, no fridge, stove, cooking, ironing. Without these distractions there is no choice but to contemplate everything that is going on in our country and wonder how on earth we are going to survive it this time.

We are again learning to live a completely abnormal life in Zimbabwe. A fortnight ago the Minister of Finance released Statutory Instrument SI 142 that banned transactions in US dollars and all other foreign currencies and announced that with immediate effect all trade was to be in Zimbabwe Dollars only. On that day the bank exchange rate was US$1 = Z$6.28. Until that day almost everything had a US Dollar price or the equivalent Zimbabwe Bond dollar price and you could pay whichever you could afford. We had been earning and trading in US dollars and South African Rand since February 2009, joined by ZW Bond dollars in 2015, in a multi currency system.

SI 142 came without any warning. With immediate effect it was illegal for me to buy my medication in US dollars for say US$10, now I had to pay for them in Bond dollars for whatever rate the pharmacist was using on that day. Assuming this was the bank rate (which it never is) the same medicines were Z$62.80 on the day SI 142 was promulgated.  Every day since then the bank exchange rate for US to Bond dollars has gone up; as I write this letter it is US$1 = Z$8.68. So that same packet of medicines, a fortnight later, is now priced at Z$86.80. It is now illegal for that pharmacist to accept payment in anything except Zimbabwe Bond/RTGS dollars and because he can only speculate what the USD$:ZW$  rate will be in a week or months time, he pushes his prices up and up to protect his investment because every single thing he sells is imported using US dollars  and has to be sold in ZW dollars. This one example can be extrapolated to every sector, every business, every producer.

Economic technocrats are popping out of the woodwork every day to bombard us with statistics and  tell us that SI 142 is the backbone of a brilliant economic policy but they say nothing about 98% inflation; no confidence in the market in ZW dollars; Z$400 million Bond notes currently being printed by the government; the irretrievable loss of everyone’s savings and pensions in Feb 2019 when US dollars were converted to Bond dollars; the catastrophic damage of 15 hour a day electricity cuts to businesses and producers; the incalculable loss of man hours spent queuing every day for fuel. Worst of all the technocrats say nothing of the human factor: pensioners who can’t afford life sustaining medicines; teachers and nurses who can’t afford to get to work; doctors who have no equipment to perform operations; employees whose month’s salary only lasts 10 days; parents who can’t afford enough food for their families. Frankly we are left wondering which Zimbabwe these economic technocrats live in because it’s not the same one as the rest of us.

While all eyes and calculators have been on the reality and impact of SI 142 the following events have gone almost un-noticed in Zimbabwe:

There is a backlog of almost 300,000 passport applications and people are being told to come back to collect in 2022. There is no passport paper or ink for printing and no US dollars to import it. Tempers rise as desperate people wanting to travel to the Diaspora to earn money to send home to their families are now trapped here.

The Minister of Agriculture, Perence Shiri, announced that 15,000 hectares of farm land is to be prioritized for allocation to war veterans: 1,000 hectares in Manicaland, Mashonaland East, West and Central; 2000 hectares in Midlands and 3000 hectares in Masvingo, Matabeleland South and North. The Minister added: “in the event of land disputes, under no circumstances should a war veteran have his or her offer cancelled.” He did not say if it was a requirement that said war veteran knew how to farm or had the resources to do so.

The government banned the private sale and purchase of maize (corn). All maize now has to be sold to and purchased from the state owned GMB at a government stipulated price.  A ban was also put on transporting more than five, 50kg bags of maize unless it is being taken to the GMB. This means that one family member may no longer transport more than five bags of maize to his starving relations and friends in another area of the country.

At the same time as the maize movement and sale ban, FEWSNet (Famine Early Warning Network Systems) issued warnings of a widespread food crisis in the country between July 2019 and January 2020. They say worst affected areas are likely to be: Kariba, Binga, Hwange, Gokwe North, Mbire, Mudzi, and Chipinge. FEWSNet issued a map of Zimbabwe with approximately 70% bright orange, indicating crisis, and 30% yellow, indicating stressed.

This is the state of Zimbabwe today: ORANGE. Orange for crisis, orange for the sunset that brings tranquility every evening, and orange for temper levels which increase daily as coping becomes ever more impossible. Until next time, thanks for reading this letter, now in its 19th year, and for supporting my books about life in Zimbabwe.