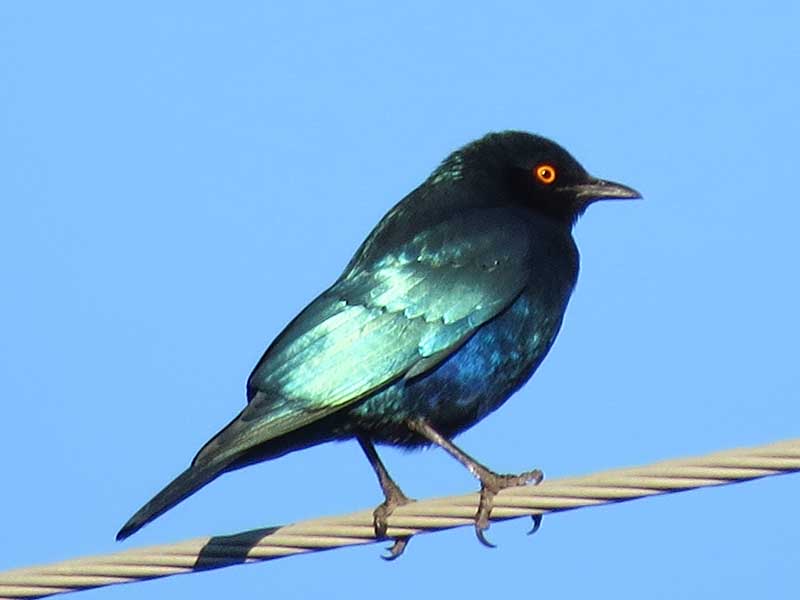 Returning to Zimbabwe after a short time away nothing can prepare you for what awaits. The sky is bright and blue, the grass tall and golden and the people always friendly and welcoming. Fleeting glimpses of starlings, kingfishers, louries and hoopoes remind you of the wonderful diversity of life in winter in Zimbabwe. On the roundabout as you approach the capital city, beautiful orange Kurrichane thrushes stab at the dry grass around life- size, wrought iron sculptures of elephants, lions and hyenas and start your heart beating again: you are home, the pulse of our beautiful Zimbabwe starts thumping in your chest.

Going into a supermarket for the first time in a fortnight is a monumental shock. Prices of everything have soared, many items have more than doubled in ten days. Locally produced butter and margarine not available and imported butter, for those who were still able to afford it a fortnight ago, has increased from $35 to $80 for 500 grams. A packet of locally produced sausages has gone from $14 to $24 dollars; locally produced breakfast cereal from $11 to $24; imported breakfast cereal from $24 to $48; instant porridge oats from $24 to $61. Locally grown sugar has increased from $8 to $12 and is in very short supply: two per customer, if you happen to be there at the right time.  And then there’s bread, or rather there isn’t any bread. One of the country’s biggest bakeries said they had stopped production because they had run out of wheat. Bakery employees quoted in the media said: “We have been told to go home and wait for news.”

Standing motionless in the supermarket, staggered at what I was seeing and trying to work out what I could afford and what I would have to do without, there was a sudden buzz of voices and people started running past me towards the back of the supermarket. Careful not to get knocked over it took me a minute or so to work out what was going on. Apparently, bread was coming out of the in-store ovens and by the time I got to the end of the line there were over fifty people in front of me. In fact, it wasn’t a line at all, just crowds of desperate, hungry people, pushing in from every direction to try and get to the front before the bread ran out. I did reach the front and got two precious loaves of bread but they didn’t make it home with me because a friend was desperate. A monthly salary which had only lasted until the 10th of the month and no money left at all for food. Hungry children to feed rent and bills not paid, no money for medicines; the trauma is being repeated from one person to the next and the next and we spend our days wiping away tears of anguish at the pain of it all.

Everywhere the stories are the same: shops are full but pockets are empty. People’s salaries in Bond dollars have not gone up and are worth less and less by the day as the exchange rate between Bond Dollars and US dollars grows ever wider. People with US dollars are either helping family members survive, buying medicines and paying for medical procedures, or they are trading on the black market and getting very, very rich. At the time of writing you need ten Bond dollars to buy one US dollar on the black market. More and more things are being quoted and charged in US dollars or “at the street rate of the day” so today a cup of tea in a restaurant is US$1 or  multiply by ten and pay Bond $10. The official inflation rate is 97% but in reality in the shops prices have increased by 350%.

And then there’s the electricity cuts: currently up to  17 hours a day, in many places power is going off at 4 or 5am and coming back on at 10pm. Between 4am and 10pm your geyser goes cold, fridge defrosts and you can’t use your stove, computer, internet, machines. Water can’t be pumped, production has virtually come to a standstill and even critical sectors including hospitals, schools and institutions have not been spared. ZESA (electricity suppliers) said a couple of days ago that: “Every effort [to keep the power on]  will be applied to make sure we get to watch AFCON,” (African Cup of Nations) football games on TV.  Football games, you exclaim, what about production, fridges, stoves, geysers, hospitals, old age homes, schools, water? Where are on earth are the priorities; where is the humanity of our government?

Our leaders seem unconcerned and oblivious to the tragedy unfolding across our country or to the enormous suffering of people. They seem to have completely forgotten us. They say these “austerity measures” are necessary for economic recovery and yet show no sign of curtailing their own extravagances: hiring luxury Dreamliner aircraft, buying thousands of weapons to quell protests, hiring American consultancy firms for US$1 million to lobby for sanctions removal; buying US$19 million worth of new vehicles for legislators and so it goes on and all the while we wrestle for a loaf of bread.

The immediate removal of the BOND dollar and return of US dollars, our US dollars which the government unashamedly converted to Bond dollars in February 2019, is the only way countless millions of Zimbabweans are going to survive yet another collapse of Zimbabwe. Zimbabwe’s leaders have learnt absolutely nothing from the economic collapse of 2008 and without drastic, immediate action; we are heading full speed over the cliff.

Until next time, thanks for reading this Letter from Zimbabwe, now in its 19th year, and for supporting my books about life in Zimbabwe.