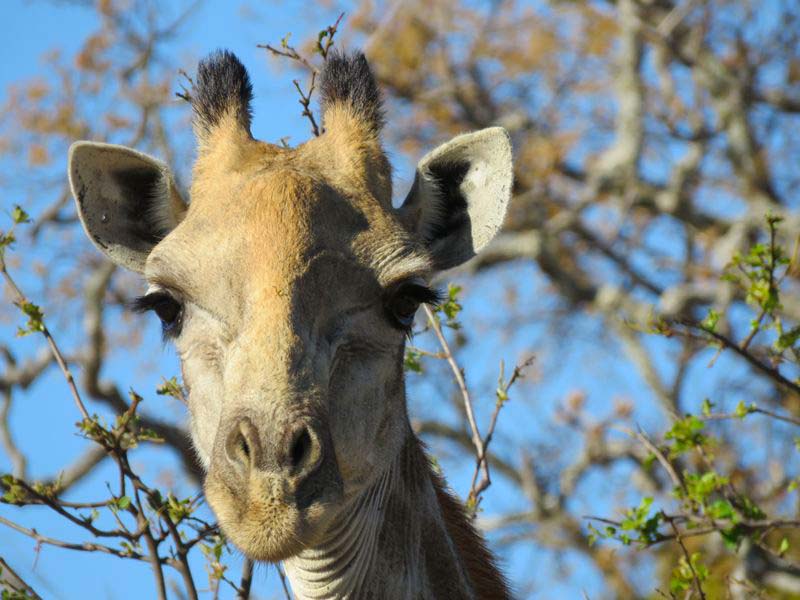 Down the yellow sandy road, over the hump, round the dusty corner and I was face to face with the luscious eyelashes of a giraffe. Luscious eyelashes hiding hungry eyes in our parched land where we are all reduced to being watchers, waiting for something to happen. For the past fourteen months, since election 2018, we’ve been paralyzed, helplessly witnessing the government converting our US dollars into useless Zim dollars, watching the loss of our savings, erosion of our incomes, soaring inflation and a new frenzy of looting and corruption.

Hunger is knocking on Zimbabwe’s door this October 2019.  Some of it we can blame on last season’s drought but we also have to apportion responsibility to the latest ‘missing billions’ story from Zimbabwe. We don’t do corruption in thousands or hundreds of thousands in Zimbabwe anymore, now it’s always in the millions and billions of disappeared US dollars. Parliament are still waiting for answers as to what happened to US$3 billion allocated for agriculture which can’t be accounted for since the government’s Command Agriculture scheme started in 2016. The missing billions didn’t translate into grain in our silos so where did it go? Mansions? Luxury cars? Foreign bank accounts? And before we even get the answers to all that missing money, or Mr Mugabe’s self confessed missing US$15 billion or ZINARA’s missing $25 billion, President Mnangagwa just announced an additional injection of ZW$1.8 billion and US$51 million into this year’s Command Agriculture programme. More seed and fertilizer or more mansions and cars?

Last week the US Ambassador to Zimbabwe, Brian Nichols, exposed the one simple fact about our agricultural capability which we all know; a fact which should be cause for national shame twenty years after Zanu PF’s seized all commercial farm land in Zimbabwe.  Ambassador Nichols said:  “In the 1990s, there was a deep drought in the region and all Southern African nations were fed by Zimbabwe, but now this country requires food aid to feed half of its rural population.”

With just a couple of weeks to go until our main planting season, the stacks of seed maize are piled high in the supermarkets but no one can afford to buy it. This morning in my home town seed maize is selling for ZW$389 for 10 kgs and Compound D fertilizer is ZW$500 for 50 kgs.  ZW$900 to plant one acre of maize is more than a lecturer earns in a month, more than a domestic or garden worker earns in five months. Desperate to try and survive the ravages of inflation which international economist Steve Hanke puts at over 800% a year, people are left with no choice but to plant maize pips left from last year’s harvest and just hope for the best.  Even more alarming are the current huge empty gaps on supermarket shelves where the staple maize meal usually is; the price sticker is there: ZW$59.89 for 10 kgs but there has been nothing to buy for the past fortnight or more.

With such a massive food disaster in the making and at a time when almost half the population need international food aid, the Zimbabwe government have been diverting our attention with a rash of new financial regulations and Statutory Instruments, just as they did at the height of the last economic crash in 2008. It is now illegal to display, quote, charge, sell, pay for or receipt goods and services in US dollars or any currency other than ZWL dollars. Large fines have been tagged on to the latest rash of financial constraints which look very much like sending us headlong back to the days of empty shelves as the government takes control of every single US dollar out there and businesses are left with nothing to use to import the goods they require..

A fortnight ago the Reserve Bank announced that Bureau de Change could not pay out more than 7% of the bank stipulated rate when buying currency. Two days ago they dropped the rate again to between 3 and 5%. At the beginning of this week the Reserve Bank banned all cash in, cash out and cash back transactions offered by the country’s mobile phone money operator, Ecocash saying they were trying to protect consumers from abuse and profiteering. In a country where banks don’t have any money and 90% of the population don’t have bank accounts, Ecocash has become the life blood of Zimbabwe.  An uproar ensued and within three days the Reserve Bank backtracked on the ban.

Frankly it’s a nightmare trying to understand and keep up with all these rules, regulations and iron fist policies and these words from ZCTU President Peter Mutasa offer the best summary of the current situation: “What the RBZ is doing is not new; the same institution blamed everyone but itself in 2007-2008. It went on the same spree and churned out Statutory Instruments weekly… but failed to reverse hyperinflation. … It is wasting time and burying the head in the sand…. These arbitrary policies are going to destroy the few remaining companies and jobs.” Mutasa concluded with the chilling words: “Citizens must prepare for the 2008 financial and economic Armageddon.”

Until next time, thanks for reading this Letter From Zimbabwe, now in its 19th year, and for supporting my eye witness books about life in Zimbabwe.