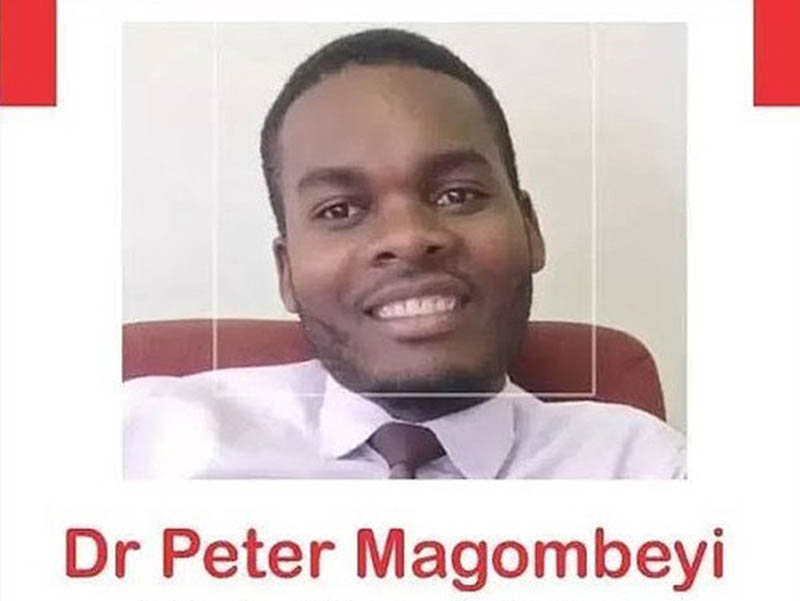 On the evening of the same day of the State Funeral for Zimbabwe’s former President Robert Mugabe, a doctor was forcibly taken from his home in Harare. While dignitaries and VIPs from around Africa wined and dined after a day in the sun and the dust at Mr Mugabe’s funeral, three men grabbed Dr Peter Magombeyi from his home in Budiriro Harare at around 10pm.

Zimbabwe stopped talking about the State Funeral, the incessant arguments about where Mr Mugabe would be buried, the huge expense of his four month long stay in a Singapore hospital and the cost of repatriating his body to Zimbabwe. We stopped talking about the two dozen men in uniform wheeling Mr Mugabe’s coffin on a red carpet at Harare airport with the red ‘this way up’ arrow still firmly attached to the flag covered coffin. We even stopped talking about the news that a mausoleum was to be built for the former President at the top of the hill at Heroes Acre in Harare. Instead our eyes turned to our own health sector where they should have been, would have been, had Mr Mugabe chosen to spend the last four months of his life in his own country, with his own people, in a Zimbabwean hospital.

Dr Peter Magombeyi, President of the Zimbabwe Hospital Doctors Association alerted colleagues that three unidentified men were forcibly taking him away from his home that fateful night of Saturday 14th September. A fortnight before, doctors had declared a deadlock with government regarding salary negotiations and working conditions and announced they would go on strike. Dr Magombeyi, leading the strike action, sent a message on Twitter saying: “When u say u are hungry and threats start to come left right and centre:” and he posted a photo of a message received on his phone which read: “Don’t say I didn’t warn you. Keep arguing, you will be picked up by a champupuri (whirlwind).”

Tweets from Dr Magombeyi in the following days read: “We signed an Oath people, we can’t do Harm to our patients. Our living conditions as Doctors has become a health hazard and mental depressant to both us the Drz and our patients… We rather stay at home till u fix this.” A few days later: “God have mercy on the Zimbabwean doctors.”

A doctor with ZADHR (Zimbabwe Association of Doctors for Human Rights) said: “Our homes and workplaces are no longer safe. We don’t know who will be taken next so we will not go to work until our safety is guaranteed. Right now, we are vulnerable.” The day after the disappearance of Dr Magombeyi doctors protested with placards outside Parirenyatwa hospital in Harare. “Every doctor in this country should withdraw their services until he is released,” the Zimbabwe Hospital Doctors Association said. On Monday Consultant Doctors and nurses joined the strike in Harare. Protests have continued daily in Harare and Bulawayo with riot police repeatedly preventing protesters from proceeding into the city centres and every night candlelit vigils are being held outside Parirenyatwa hospital in Harare.

The High Court has ordered the government to look for Dr Peter Magombeyi. Police Asst Commissioner Nyathi said:  The possibility of a third force being involved in the alleged abductions for political expedience and to sustain the human rights abuse narrative ahead of the forthcoming United Nations General Assembly cannot be ruled out.”

A junior doctor in Zimbabwe currently earns around Z$1400 a month made up of Z$400 basic salary and Z$1000 ‘on call allowance.’ Z$1400 is equivalent at the time of writing to around US$88 and getting less and less by the day as the value of the Zim dollar continues to decline. Would your doctor work for US$ 88 a month? Did Mr Mugabe’s doctors in Singapore work for only US$88 a month?

As the hot September winds blow across our country the natural whirlwinds (champupuri) fill our skies with dust and debris while the winds of discontent grow ever stronger in Zimbabwe. Our thoughts are with Dr Peter Magombeyi and his family and friends and the calls of the protesting doctor’s echo in our hearts: “NO PETER… NO WORK.”

Until next time, thanks for reading this Letter from Zimbabwe, now in its 19th year.

For archives of Letters From Zimbabwe, to subscribe/unsubscribe or for information on my books about life in Zimbabwe please visit my website www.cathybuckle.co.zw or go to www.lulu.com/spotlight/CathyBuckle2018